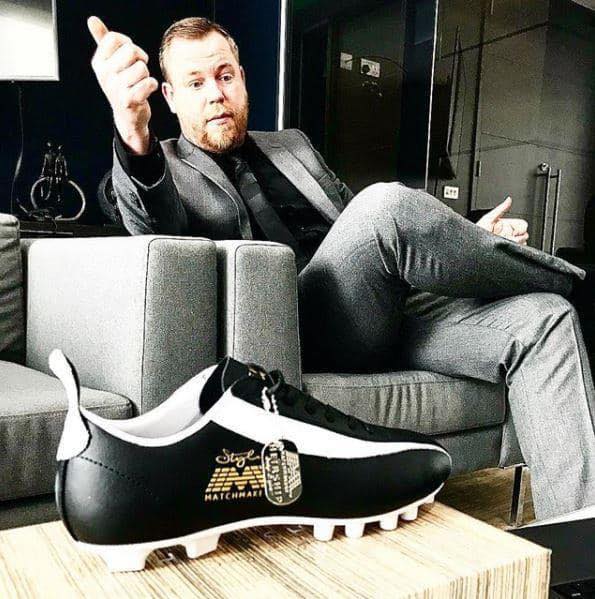 Owner and CEO Scott “Matchmaker” Michaels says the brand has wised up since the sixties and seventies and believes that today, football boot brands need to be much more respectful to their moral compasses.

“Becoming the  CEO and owner of Stylo Matchmakers gave me the chance to stand up against everything that I believed to be wrong with the way popular football boot manufacturers operate. With the iconic name of Stylo Matchmakers and the time line which dates back to the year England won the World Cup, we have received lots of love from true football fans that understand our gripes with some of the accountability issues that exist in modern football. We now stand with the people that share our concerns on brands who continue to waste huge sums of publicly spent money on immeasurable sponsorship deals. It’s time somebody did something about it. Our issue is that sponsorships are designed to make the rich, even richer and for what? A Bugatti, a holiday mansion and a yacht? This is why we at Stylo Matchmakers have completely boycotted sponsorships.

For us, the people’s best interest will always come first and the superstars are no exception. Unlike our competition, we do not demand their influence or suck up to them promising them cheques and a life of luxuries, instead our anti-sponsor message and campaign is way more powerful to the rest of the football world and the best thing about it, is that it is timelessly sustainable. If the superstars do not want to help us spread our transparent and honest values, so be it, that’s on them.

Since giving sponsoring a kicking, we now focus on budget efficiency and serving real people with a first class service. We don’t charge our customers or investors for unnecessary marketing and believe the marketing budget we do work to is better spent on showing the world of football, that we are not just another football boot brand drooling over short lived “influencers”, we are better than that. I actually feel sorry for players who feel they need to to keep up appearances in the brands who make their name in shameless sponsoring. Without education on the subject, we understand it’s only natural for children to be manipulated by one another in the playground, whilst emulating their idols they watch on TV, but the fact is, a majority of footballers don’t ever grow out of this. We all know a footballer who takes themselves far too seriously when it comes to boots, even at grass roots level, you know the ones, they turn up with their new glittery boots as worn by superstars and expect them to make them play better.

The reality is that dreaming you’re playing in the World Cup Finals for 90 minutes doesn’t do anybody any favours. And it gets worse! Embarrassingly, a majority of professional players “fake it ’til they make it” and will only buy into the brands that sponsor, in order to fit in with the players who are actually offered money. In our eyes, these players are nothing more than sheep and are also sadly victims of influence. In fairness to them, some of the more gullible professionals who claim to be sponsored athletes as you can see on their Instagram handles are actually lied to by their agents, in order to keep them happy, providing them with newly released boot models a couple of times a season.

These guys can be felt sorry for, however why is taking a bribe from a sports company so special that you have to tell everyone anyway? As for the players who outright lie about their imaginary sponsorship deals to make them feel better, they are the real sad cases. They can’t see it but they actually limit opportunities for themselves by doing this. For those who do sign on the dotted line, yes we credit you for your talent and ability, but we don’t respect you as a human being for accepting dirty money. If the impact of sponsored footballers and over priced boots also deals grinds your gears, join us in our campaign, leave the sad victims behind and represent Stylo Matchmakers, the people’s brand from England.”