Stylo Matchmakers Heirship Blackout with a hybrid hard ground stud technology. Easy manoeuvrability on harder pitches and artificial ground. Outer Material: Premium strong durable premium synthetic upper. Boots worn by legends….. Stylo Matchmakers Heirship Blackout is designed for the very cool player who calls the shots Worn by many players around the world this boot is ideal for the player who lets their game do the talking.

NO NONSENSE, ALL BLACK, CONTEMPORARY STYLE FOR THE MODERN DAY MATCHMAKER

The Stylo Matchmakers Heirship Blackout was brought to market to satisfy the needs of those of today’s players, those who are looking to stand out whilst letting their performance do the talking. 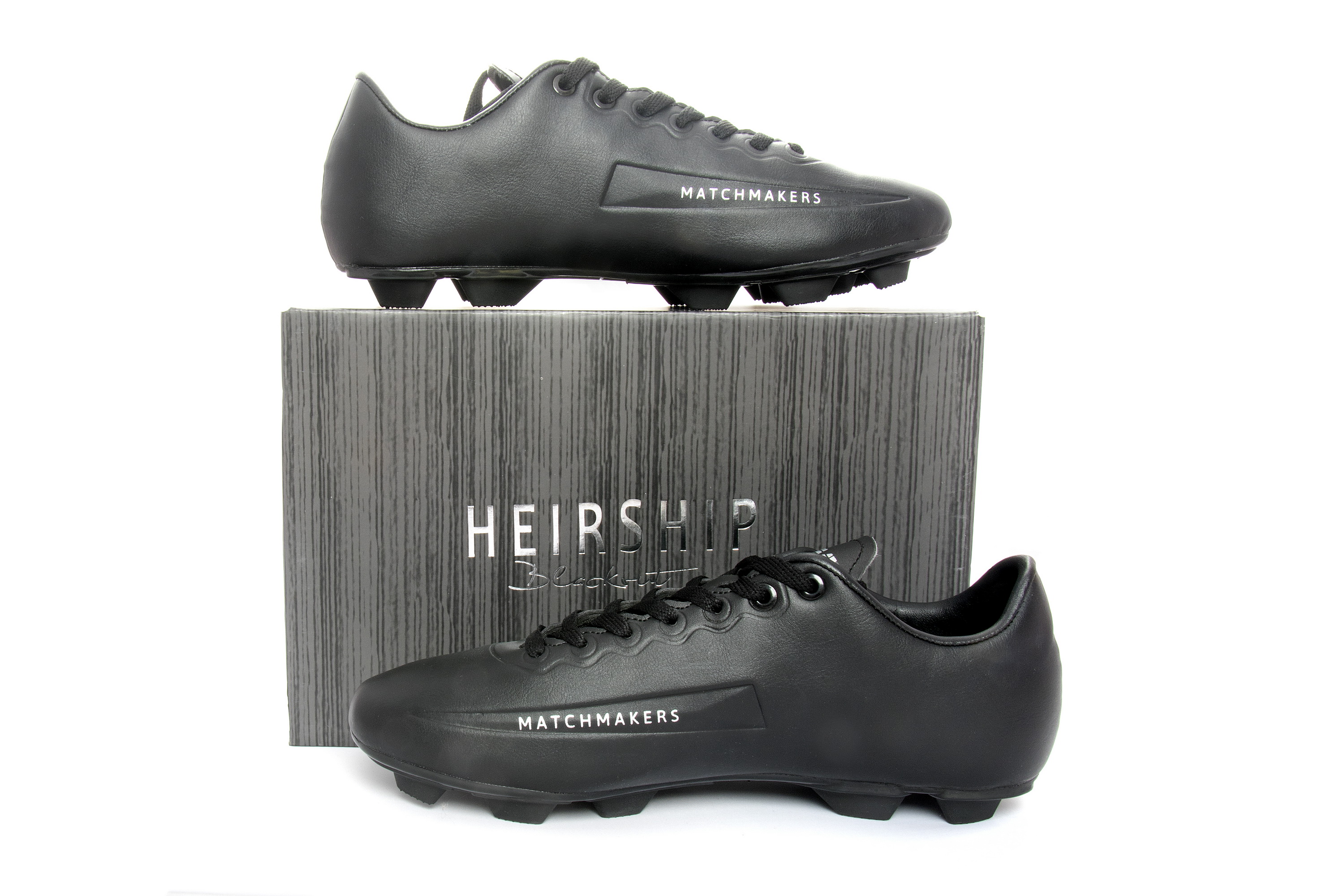 With a hybrid hard ground stud technology, this matte black boot is suitable for both artificial and grass pitches which means easy maneuverability on harder pitches and artificial ground. The Heirship Blackout upper is made from a strong and durable, premium comfortable synthetic which remains very lightweight.

Kanu played for Nigerian team Iwuanyanwu Nationale, as well as the Dutch side Ajax, Inter Milan of Italy, and English clubs including Arsenal, West Bromwich Albion and Portsmouth.

Kanu is one of few players to have won the Premier League, FA Cup, Champions League, UEFA Cup, as well as an Olympic Gold Medal and is today regarded as one of the best players in African football history.

Hundreds of Junior Premier League footballers who attend the PFA center in Stockport, Manchester received a pair of Heirship Blackouts.

“I love a black boot, these are fantastic quality, the synthetic is very comfortable and hard-wearing, there are the parents and grandparents who remember the Stylo Matchmakers brand from the seventies but it is obviously new to this generation of young players. I’m looking forward to promoting equality and the power of teamwork through matching black boots as Stylo did in the old days, whilst encouraging all of the players to wear them in training as part of their uniform”

Top football coach Dave1on1 gets stuck into the Stylo Matchmakers Heirship Blackouts and creates a brand exposing video for his YouTube following.

“Really pleased to have the Stylo Matchmakers boots on today, going to give them a little test drive to see what they’re all about.”

James Blurton (JurtonVII) is also a YouTuber and soccer skills athlete based in Stoke, England. Here he is showing off the Heirship Blackout ability:

Not just for adults that want to stand out. The Heirship Blackout model has been made across a wide range of 21 sizes, from a small junior EU28 right the way up to large adult EU48. (Junior 10.5UK – Adult 13UK)

These are just some of the happy matchmakers who sent in their photos with their brand new Heirship Blackout boots.